I told you about aerosol transmission roughly a year before the WHO and the CDC stopped suppressing that truth and told you about it.  Now I’m going to tell you about ivermectin.  Some parts of the world are currently using ivermectin to: 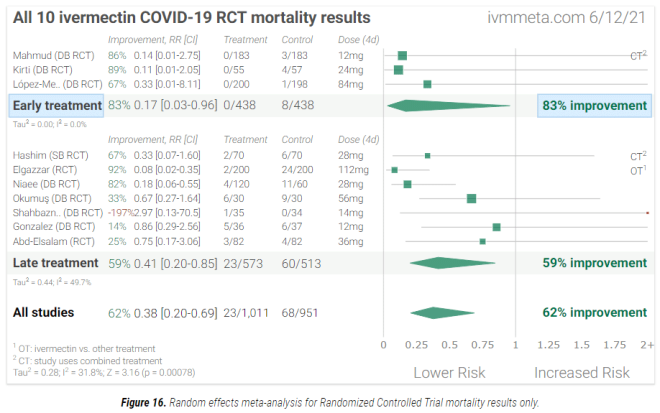 Currently, there is a huge political war against using ivermectin that will greatly delay its adoption around the world.  It is what it is.  The politics surrounding those battles are actually reasons to be bullish about publicly-traded pharma companies making COVID-19 treatments and vaccines.  The current system is corrupt, supports the profitability of the pharma industry, and has bamboozled the public into wrongly assuming that COVID-19 will magically go away.  Investors may be massively underestimating the growth of vaccines and monoclonal antibody treatments.

Ultimately, ivermectin is good news for humanity.  We have a proven, highly effective drug that will allow societies to operate with fewer social restrictions than what we’ve seen so far.  I don’t think the coronavirus pandemic will turn into a coronapocalypse because the world will slowly and eventually figure things out.

For prophylactic use (prevention of COVID-19), the drug has to be taken regularly.  This happens naturally in some African countries like Zimbabwe where parasite diseases are common.  The current data suggests that ivermectin plays an important role in lower COVID-19 mortality in Africa.

However, the data from Africa isn’t the greatest due to lower rates of PCR testing and lower quality data on deaths (e.g. excess mortality data can be used to estimate the true impact of the coronavirus if COVID-19 deaths are being undercounted).  I haven’t yet found good data on what happens when health authorities decide to aggressively push the use of prophylactic ivermectin.  Ivermectin zealots point out that the Indian province of Uttar Pradesh experienced a more rapid decline in cases than another Indian province (Tamil Nadu) due to their opposing stances on ivermectin.

Let’s start with what drug repurposing is.  At the beginning of the pandemic, scientists took existing drugs and tested them in cell cultures.  If the drug works on the coronavirus in the lab, then it had the potential to stop the virus in humans.  (Historically, we know that most of those drugs won’t turn into useful treatments for humans.)  Ivermectin was one of those drugs.  Because the drug has already been used in humans for decades, we know that ivermectin has an excellent safety track record.

Because the safety of repurposed drugs is known, one can easily make an argument for using them even if we’re not sure if the drug is helpful.  If it turns out that the drug has no benefit, very little harm has occurred to the patient.  (*Ivermectin is not 100% safe.  Drugs are poisonous if you take too much.  Ivermectin’s effect on pregnant women is debated.)

The scientific establishment has decided to wage a propaganda war against drug repurposing.  One theory for this is that safe and effective drugs would create a problem for big pharma’s drug pipeline, which depends on Emergency Use Authorizations (EUAs) to get to market early and without definitive proof of efficacy.  I would think of EUA-approved drugs as ‘somewhat experimental’ because the approval process was rushed and not very rigorous.  Larger, more expensive trials would be needed to really know if EUA-approved drugs are helpful or not.  Ivermectin on the other hand is clearly effective and also happens to be one of the safest drugs around.  It is difficult to justify semi-experimental drugs when ivermectin exists.  Drug regulators should make pharma companies go through more trials before their drugs are approved.  This would drastically alter the economics of drug development because additional clinical trials are expensive and many drugs would fail those additional trials.

This war will definitely slow the adoption of ivermectin.

Why I am still optimistic about COVID-19 treatment stocks (GILD, REGN)

Corruption in medicine has existed for decades. Drug regulators in the United States sometimes approve drugs that they shouldn’t.  For example, the scientific evidence suggests that antidepressants and most psychiatric drugs should be taken off the market.  Antidepressants likely have no benefit over placebo treatments.  However, they create severe withdrawal problems and have strong side effects.  In practice, this hasn’t been a problem for the profitability of drug companies.  Patients see benefits from antidepressants because the placebo effect is very real.  The abuses have gone on for decades without any reckoning for the pharma companies.  It is what it is.

As far as Remdesivir and monoclonal antibodies go, those drugs would probably do more for patients if given during the early stage of disease rather than the late stages of disease.  One leading theory for COVID-19 is that the early stage of disease consists of the virus multiplying while the late stage of disease consists of the immune system overreacting and causing damage even though the virus has been killed.  Antivirals and antibody treatments won’t do anything when the virus is already dead.  Currently, those treatments are used for late-stage disease because of how the FDA justified lower EUA approval standards.  The current situation is crazy because drugs are being administered in an unproductive manner.  Still, regulators will continue to promote pharma profits like they have done so in the past.

The profitability of COVID-19 treatment depends heavily on whether or not COVID-19 is eradicated.  Thanks to the corruption and politicization of science, a lot of people wrongly believe that COVID-19 will magically go away.  Liberals tend to blindly believe the science establishment’s narrative that vaccines will save us all.  Conservatives tend to push back how public health policy has been weaponized against them, leading them to embrace the narrative that COVID-19 will eventually go away by itself due to herd immunity from natural infection and vaccines.  The common narratives are not supported by actual scientific evidence or theory.  I’ve blogged about the failure of non-mRNA vaccines, why it took several years for the best vaccines to solve the problem, and why scientists expect the COVID-19 vaccines to lose effectiveness against future variants.  The politicization of science is causing people to misjudge the profitability of COVID-19 treatments and vaccines.  The coronavirus is here to stay.  Sorry.

Antibody treatments and antivirals could grow into a massive market

At 25 minutes into this presentation, Ralph Baric talks about antibody treatments in a mouse model.  It shows that early treatment is far more useful than late treatment.

Because there is money to made here, I would expect the science establishment to pivot towards these drugs being used earlier on patients without severe symptoms.  Doctors will likely push expensive treatments onto patients who are at high risk of dying from COVID-19, e.g. old people and people with co-morbidities.  This is a much larger market than people with serious COVID-19 disease.

To make even more money, they could recommend early treatments to young patients so that they don’t suffer from long COVID.  Long COVID is a poorly understood disease where people experience medical problems for months following a COVID-19 infection.  Some long COVID sufferers are too tired to work because of their condition.  At the moment, it is unclear if antivirals or antibody treatments have an effect on long COVID.  However, drug companies have been known to encourage doctors to prescribe drugs even if they aren’t proven to fix a problem.

Youtube has been censoring ivermectin videos such as Pierre Kory’s testimony before congress and his appearance on Bret Weinstein’s podcast.  This type of censorship could lead to many unnecessary deaths.  I see this censorship eventually turning into a massive culture war issue.  The infringement on somebody’s access to life-saving medication will trigger many people, including those with non-conservative values.

However, I don’t think any controversy would hurt Youtube’s profits much because those profits are hard to boycott.  Because both Google and Youtube sells ads on an auction basis, large losses of customers would only lead to a small drop in revenues.

How to get medical information on ivermectin

The FLCCC organization has lots of information on information on invermectin as well as best practices for treating COVID-19.  Their website talks about how to get ivermectin if you are interested in taking it yourself (without going through the ivermectin for horses/dog route that some Youtubers talk about).  The FLCCC may be biased towards overstating the benefits of interventions like ivermectin.

You can do your own research to figure out if somebody is basing their advice on scientific evidence or on politics.  The website IVMmeta summarizes all of the various studies performed on ivermectin.  Andrew Bryant and Tess Lawrie provide a higher quality meta-analysis of the evidence- here is their latest preprint.  However, their work will not always contain the latest data.

You can go read the primary sources for yourself with Google Scholar and bypass paywalls via Sci Hub.

To figure out if a source is reliable, a quick shortcut is to figure out if that source addresses all of the randomized controlled trials performed so far or if they focus on selective evidence that supports their position.  For example, the GAVI vaccine alliance uses Google Adwords to promote misleading information about ivermectin.  They cherry pick the Medina-Lopez et al. study because those researchers concluded that their evidence did not support ivermectin use.  If you read the study, you will see that the data actually leans towards ivermectin use.  Nobody died in the ivermectin group while 1 person died in the control group.  The primary endpoint also would have favoured ivermectin use but the researchers decided to move the goalposts around by changing endpoints midway.  174 doctors have signed a letter calling for the study paper to be retracted due to its unsupported conclusion.

Ivermectin will be a game changer… eventually

I don’t think ivermectin will end the pandemic by itself.  The parts of the world that are using ivermectin are able to get the number of cases down to a low number but haven’t been able to eliminate the virus like New Zealand, Australia, etc.  It’s possible that ivermectin combined with other measures (e.g. vaccines, better contact tracing) could eliminate the coronavirus without any lockdowns or onerous social restrictions.  That process would probably take several years if we extrapolate from our experience with measles, smallpox, etc.

The politicization of public health is a huge problem

Right now, people are more concerned with fighting each other (or exploiting the pandemic) than they are about fighting the coronavirus.  This explains why medical practices are so different across the world.

The situation is not good because public health policy is being driven by politics and the culture wars rather than running a country well.  I’m quite disappointed in humanity at the moment.  However, I realize that I should accept the world for what it is.  It’s going to take a while for things to get better.  And because the coronavirus is here to stay, some companies are going to make a lot of money selling vaccines and drugs for COVID-19.

Tess Lawrie talks about the roadblocks that ivermectin adoption faces, such as clinical trials biased towards a negative result.

Dr. Paul Marik provides his opinion on Ivermectin vs Remdesivir vs HCQ.

The story of stomach ulcers is one example of the medical establishment suppressing the truth for several years.  It is now accepted that stomach ulcers are caused by bacteria and can be treated with low-cost antibiotics instead of expensive drugs or risky surgery.

This site uses Akismet to reduce spam. Learn how your comment data is processed.