Liberty SiriusXM Group (LSXMA/B/K) is trading at roughly a 27% discount to its NAV.  The latest investor presentation discusses the discount:

As LSXMA is actively taking advantage of the discount by buying back shares, the discount should resolve in due time.  In the past, LMCA traded at a discount to the DTV (DirectTV) shares that it owned and that trade worked out well.

My Google Sheets calculations are here (it is updated with LSXMA/B/K’s latest share prices).  Use File –> Make a copy to edit it.  I own LSXMA shares.  This is a bet on the NAV discount narrowing as well as a bet on Sirius XM (SIRI) itself.

Sirius XM offers satellite radio in the US and has a monopoly in satellite radio.  It competes with terrestrial radio (which is not subscription-based and doesn’t monetize as well as satellite radio), Internet radio, and other audio products (e.g. podcasts).

I believe that Sirius XM is an attractive investment as monopolies are often great businesses.  Its cash flow continues to grow as satellite radio hasn’t quite reached full penetration.  The company achieved 5% subscriber growth in the last 9 months.  The company also sees a small amount of earnings growth from inflation and price increases. 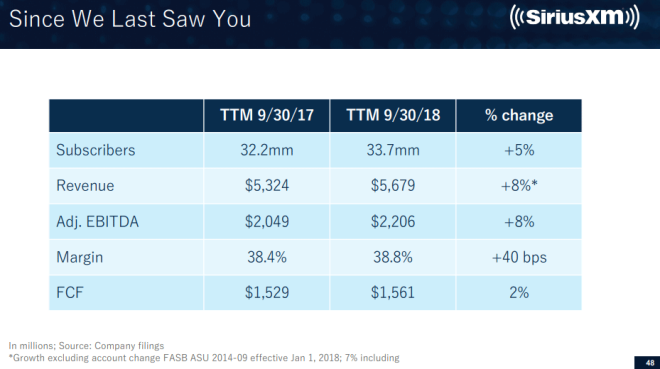 SIRI is also buying back shares as the company generates a lot of cash flow and is returning that cash to shareholders.  It is not particularly cheap at the moment.  Its P/E ratio is roughly 29.

This tracking stock pretty much consists of SIRI shares, margin debt, and debt.

EDIT (12/30/2018):  Well this is embarrassing. It looks like I missed about a billion in debt securities that LSXMA owns.

Note that my calculations are likely a little inaccurate as I did not spend the time and effort to carefully comb through Liberty’s filings and calculate the net asset value accurately.

Liberty’s investors presentations assume that taxes are deferred to infinity and beyond.  When taxes are deferred for a very long, they essentially act like an interest-free loan from the IRS and have a present value that approaches zero.  In practice, Liberty does occasionally pay taxes early instead of deferring them for decades.  So, while the present value of future taxes is difficult to estimate, you should assume that the number is a little higher than zero.  The numbers from Liberty’s investor presentations slightly overstate the discount.

The LSXMA shares “ought” to be worth several percent more than the LSXMK shares as they have greater voting power.  Because John Malone values voting power and control of his companies, it is likely that he will demand a premium for his super-voting shares if the share class structure were to collapse.  In practice however, the LSXMK shares are more liquid and sometimes trade at a premium to the LSXMA shares.  The B shares are not very liquid.

5 thoughts on “LSXMA is trading at a discount”

This site uses Akismet to reduce spam. Learn how your comment data is processed.